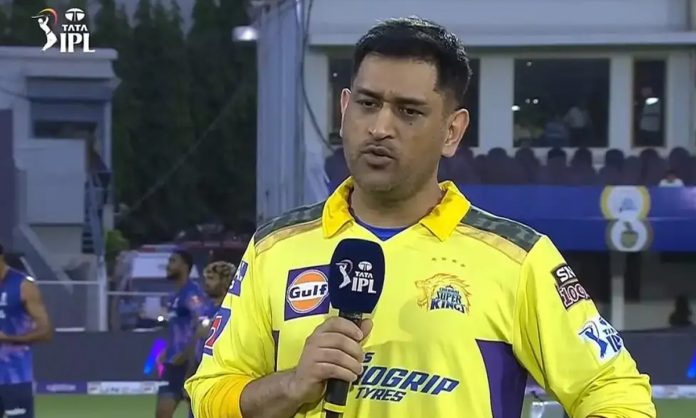 MS Dhoni has confirmed his participation in the Chennai Super Kings set up for the next season of the IPL and said he does not want to disappoint the CSK fans by not playing a match at Chennai before bidding adieu. CSK had a poor run in the IPL 2022 and went through quite a few changes this year, which backfired, thereby playing a spoilsport in their run. But they have a head start for the next one as MS Dhoni will be back with the team as a player, and he is anticipated to stay as captain.

Dhoni had stepped down from the captaincy role and handed over the baton to Ravindra Jadeja before the tournament commenced. Jadeja, who had no prior experience of captaining a team and was totally new to the role, had big shoes to fill in because Dhoni had created a legacy. But the plan failed miserably for CSK as the team lost four matches in a row as they entered this edition of the IPL. During the toss of the 68th match of the IPL 2022, MS Dhoni confirmed his presence at the CSK camp as a player for next year. When Ian Bishop asked him about his availability for the next season, he said: “Definitely, it’s a simple reason because it will be unfair not to say thank you to Chennai. Mumbai is one place where as a team and as an individual I’ve got a lot of love and affection. And it won’t be nice to do that to CSK fans.”

“Hopefully next year it’ll be an opportunity where the teams will be traveling so it’ll be like a thank you to different places and you’ll be playing games at different venues. Whether it’ll be my last year or not is a big question because you can’t really predict something that is two years down the line but definitely I’ll be working hard to come back strong next year,” he added. Ravindra Jadeja, who departed the Super Kings camp due to injury, will also be in the fray for the 2023 season, giving the four-time IPL winners another boost. This refutes speculations that Jadeja and Dhoni had a falling out after the leadership switch midway in the Super Kings’ 2022 season.